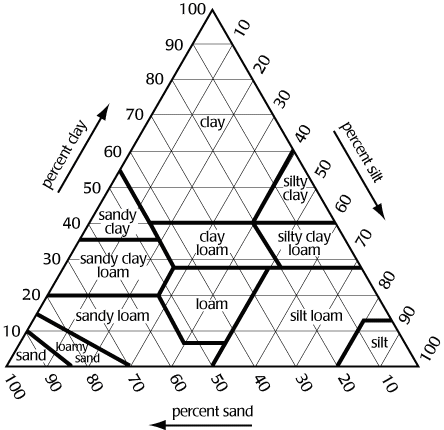 Short review of the physical properties and structure of soil
The physical properties of soil are those characteristics which can be seen with the eye or felt with between the thumb and fingers. They are the results of soil parent materials being acted upon the climatic factors (such as rainfall and temperature) Soil is a variable mixture of organic and inorganic materials, which contains life and constitutes a complex dynamic biochemical system of solids, liquids and air.
Soil is the medium in which the plants grow. The term soil is a collective one used to include all soils, as vegetation means all plant.
The soil matrix of soil can be either inorganic (minerals ) or organic. Decomposed organic matter is often called humus.Clay is defined as particles <0.002 mm diameter, slit is between 0.002 and 0.05 mm, and particles between 0.05 and 2.0 mm are sand.Clay particles are the smallest, most complex and most chemically active mineral fraction. Soil may also contain colloids. These are very fine particles (<0.001mm diameter), which can be mineral and/or organic in origin. They have variable shape, are negatively charged and have a large surface area relative to their mass. The soil colloids, both organic and inorganic are the most chemically active components of soil and hence play a vital role in the formation and the stability of soil aggregates and hence soil structure. While it is not generally possible to alter the texture of a soil, it is possible to affect its structure by adding or removing organic matter. This is why the accumulation of soil organic matter is so vital in the maintenance of soil structure.

The soil-water relationship of soil is probably the most important physical feature affecting its use. Normally a film of water ( of variable thickness ) surrounds each particle, and this contains soluble plant nutrients. The drier the soil, the thinner the film and the more firmly the moisture is held by the particles. In very wet soil, as occurs after heavy rain, or irrigation the film becomes so thick and weakly held that the water moves by gravity down through the soil pores. In other words drainage occurs. Soils become waterlogged when all their pore space is occupied by water. In these conditions they contain little air and are hence anaerobic.

This always causes some difficulty to the untrained-it did to me for ages.In simple terms, the ability of soil to hold on and then release cations from the clay particles is called the soil’s Cation Exchange Capacity, or its CEC. The soil pH, hydrogen and mineral levels affect the CEC which roughly indicates the strength of the land.CEC at the 1.5 level, which occur on very poor country, shows a soil much in need of help. This can only rectified quite slowly, as the soil could not hold a higher application at one time. If you take steps to increase the organic matter by mulching as well, the soil improvement will be hastened.  Elements having an electrical charge are called ions. Positively-charged ions are cations; negatively-charged ones are anions.

The most common soil cations (including their chemical symbol and charge) are: calcium (Ca++), magnesium (Mg++), potassium (K+), ammonium (NH4+), hydrogen (H+) and sodium (Na+). Notice that some cations have more than one positive charge.

Common soil anions (with their symbol and charge) include: chlorine (Cl-), nitrate (NO3-), sulfate (S04=) and phosphate (PO43-). Note also that anions can have more than one negative charge and may be combinations of elements with oxygen.

Clay particles are composed of minerals that, in general, posses a negative electrical charge. In some mineral particles this charge is built in to the clay crystals, and is unaffected by changing soil conditions. This is called fixed charge. In other clay minerals, and in organic particles, the charge is altered by changes in soil acidity. This charge is called variable charge. Variable charge is greatest under alkaline conditions, and least under acidic conditions.The negative charge of clay particles give them the ability to attract and hold positively-charges molecules ( cation ). Nutrients such as calcium, magnesium, potassium and many other soil elements are cations. The ability of the soil to hold on to cations is cation exchange capacity ( CEC ). Nutrients retained by CEC are prevented from leaching out of the rooting zone, yet are held loosely enough to be available to growing plants. The soil properties most closely related to CEC are soil texture and organic matter content. Fine textured soils have more CEC than coarse-textured soils, and high in organic matter have more CEC than low organic matter soils. Also, non-acidic soils have more CEC than acidic soils.CEC is measured in millequivalents per 100 grams of soil (meq/100g). A meq is the number of ions which total a specific quantity of electrical charges.